In addition to Pho – a typical dish that should be on your list when in Vietnam, there are also other delicious dishes made from the same ingredients, such as: Bun (vermicelli), Pho “Cuon” (spring rolls with beef), Mien that once eating, you will remember them forever. Their variety, eye-catching display, and delectable are the reasons why everyone wants to come back and enjoy it again. In this blog, we will show you insights into those mouth-watering dishes for both vegan and non-vegetarian eaters.

Did you know Bun is the third most popular starchy food in Vietnam after rice and pho? From the North to the South, Bun are popularly known and collectively called Bun.

Though this is a long-standing traditional dish of Vietnam, the origin of Bun is not clear. There is an anecdote telling that this food was from an anecdote of King An Duong Vuong: “While preparing a party for the princess My Chau, a chef accidentally spilled rice flour into a basket in a cauldron of boiling water, turning the rice flour into long white strings. It would be a waste if we didn’t use that mistaken food, right? So he stir-fried this white flour with celery as the appetizer. Unexpectedly, when the party started, the strange food was again noticed by the king and wholeheartedly praised. That was how stir-fried noodles were born and became one of the favorite dishes on the royal menu. Bun evolved from there, would you like to enjoy this special dish?

From North to South, Bun contributes to the diversity of Vietnamese cuisine. Clean, chewy, delicious noodles combined with many typical broths from all over the country creates various famous dishes with the brand name “Made in Vietnam”.

Bun cha is the top choice in addition to pho when visiting Hanoi. Bun cha consists of vermicelli and grilled sliced pork and meatballs. The highlight is the sweet and sour sauce prepared by the locals in a recipe that combines fish sauce and carrots, papaya blended with barbecue to create an indescribable flavor.

Enjoying a bowl of hot bun cha with the fragrant meat that has just been fresh from oven at the restaurants on Hanoi streets will definitely be an unforgettable impression for you.

Bun Bo Hue is a signature dish in Hue, the former capital of Vietnam. The main ingredients of the dish are vermicelli, beef, pork rolls, a characteristic red broth with lemongrass, and sauces. The sweetness of the broth is combined with the ingredients to create an attractive harmony of dishes. Enjoying a bowl of hot bun bo is the most attractive thing when you come to Hue. 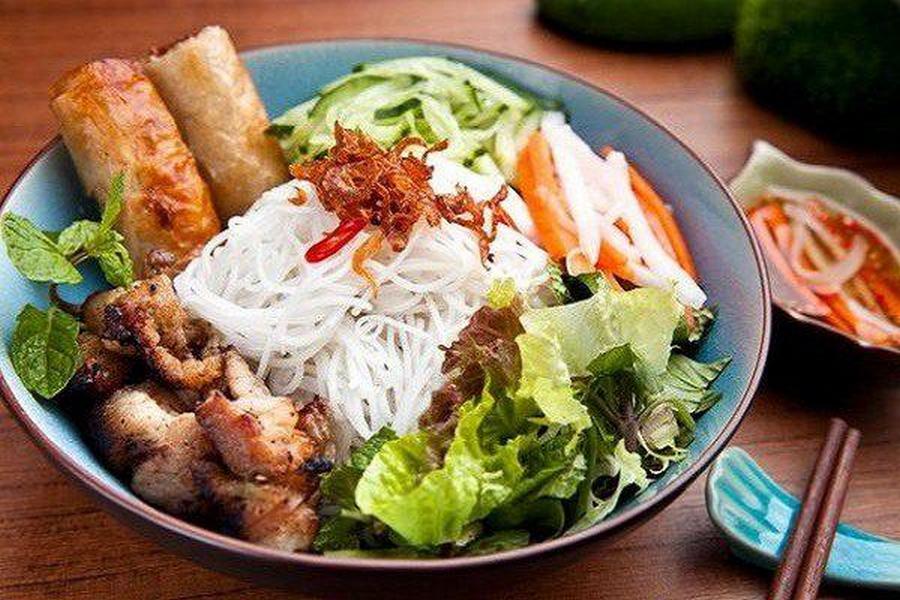 Coming to Saigon, you will be fascinated by the fragrant barbecue scent of the roadside barbecue vermicelli shops. Make you not restrained, just a bowl of vermicelli filled with golden grilled meat fragrant with lemongrass, green vegetables, and the sweet-salty taste of chili fish sauce with sour food and peanuts blending together, so the dish is hard to resist.

The attraction of these vermicelli bowls is that the grilled meat is marinated with spices to create an attractive aroma and served with raw vegetables rich in vitamins. You won’t forget its taste once you try.

Pho spring roll is a dish derived from pho, first appeared at the Pho restaurant at Ngu Xa intersection, Nguyen Khac Hieu street, Hanoi. This night pho shop is open to serve midnight football viewers and night-shift workers. One day, a visitor came to the restaurant to enjoy the night noodle. The shop ran out of broth, only a few noodles left. Creatively, the shop owner has taken the unshredded pho, let it dry, then rolled it with stir-fried beef, herbs and not forget to add a bowl of flavorful dipping sauce. After enjoying, the customer complimented the owner for his delightful and impressive food creation, and that was how rolled pho was born.

Since then, pho spring roll has made a mark in the hearts of the people of Hanoi and has become a unique culinary culture that not only locals but also tourists love.

Pho spring roll is very simple, the wrap rolls the ingredients including beef, eggs, sausage, cucumber, carrot, lettuce, and cilantro. The indispensable highlight of the bowl of sweet and sour sauce creates a cool, rich taste that is cleverly prepared according to the seller’s own secret. Pho spring roll is not too hot, can be eaten all year round, especially suitable for vegetable lovers or vegetarians (without meat). The most suitable address to enjoy this dish is on Ngu Xa Street, Hanoi

Slightly different from Bun and Pho spring roll, Mien is a type of dry fiber food that can be produced from different grains or mixed with special grains made from Dong tree Vietnamese (Dong is a tree with purple stems, purple tubers, and red flowers). Mien is one of the indispensable dishes of Vietnamese people, especially on holidays and important holidays. Mien is made from different ingredients but mainly made from dong flour, thin, tough, not crumbled fibers, and when soaked in water, it will expand. In addition, there are Mien made from green bean flour, rice flour… Vermicelli is processed by Vietnamese people into many different dishes such as: fried Mien, mixed Mien … combined with other ingredients like herbs and vegetables to create attractive dishes. Many Mien crafting villages, which have existed for a long time, they still retain traditional crafting Mien recipes., creating thin, tough Mien fibers that retain the flavor after processing.

Bun cha is one of the most famous Vietnamese specialties. If you are a vegetarian, Bun cha chay will be a great choice when visiting Hanoi. The difficulty of making Bun cha chay is how we can combine all ingredients perfectly to create a characteristic flavor for the dish. With vegetarian vermicelli, tempeh (a traditional Indonesian soy product) is used to replace pork and cooked with typical spices of Bun Cha. Although tempeh inherently has a distinctive flavor and can be hard to eat for many people, it makes the product better than ever when combined with other ingredients. The well-seasoned soft tofu sausage combined with a bowl of sweet and sour pineapple sauce will create an appetizing meal.

Vegetarian spring rolls typically contain fresh green cabbage, slides of roast meat analog, and several other vegetables wrapped in a rice noodle with a very thin layer. The fresh flavor of Pho Cuon chay with well-seasoned dipping sauces, which are garnished with carrot flowers will make the dish more attractive.

Bun bo Hue is a Vietnamese noodle soup that originated from the city of Hue, the ancient capital of Vietnam. The authentic version consists of a rich broth infused with lemongrass, beef, salt, sugar, and a chili paste called saté.

“Bun bo Hue chay” usually includes thick round noodles served in a vibrant, spicy, and flavorful broth with fried tofu, vegan beef, sautéed mushrooms, onions, and many other toppings. It’s filling, delicious, and makes a complete and healthy meal. Enjoy a bowl of Vegan Bun bo Hue with the broth that is exquisitely sweet from slow-cooked vegetables and topped with a fragrant lemongrass blend that just explodes with incredible flavor.

Bun Tron (Bun mixed) is one of the favorite foods in Vietnam. The main ingredients of Bun Tron are Mien (cellophane noodles) that is poured over boiling water to the noodles are soft but still chewy. The way to make Bun Tron is to mix the combination of sliced shallots, chili powder, some seasoning, and Mien. It’s a dry type noodles dish that includes dried fake beef, bean sprouts, dried onion, and other raw vegetables; served in a sour and sweet sauce made from fish sauce. The noodles are added into the bowl and then some pork chop, herbs, peanuts and dried scallions. Next, the cooks will add sour sauce, the most important ingredient to make this dish delicious. Each shop has a different way of making this sauce and they keep it as a secret. Therefore, you may enjoy different tastes in different restaurants.