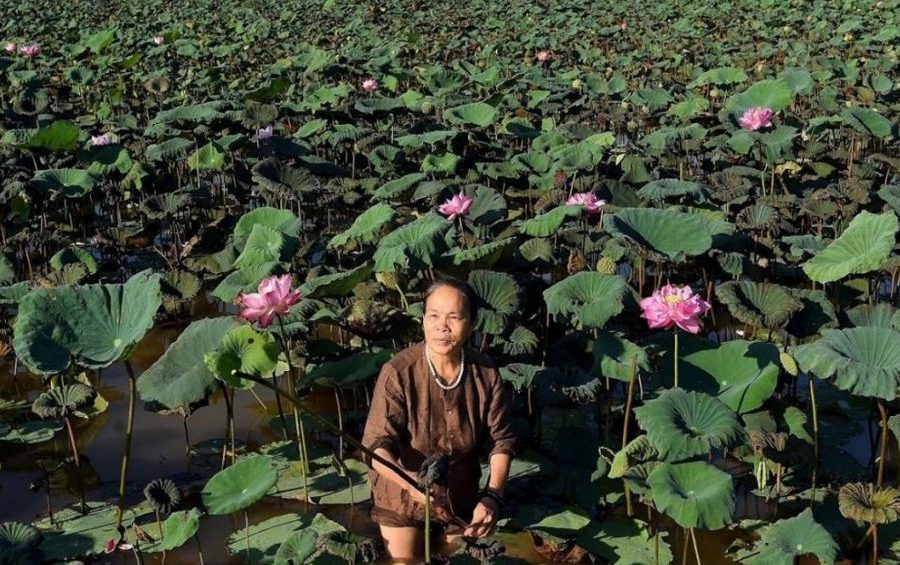 Born in a family of making and selling traditional silk to the French during the colonial time, Ms. Phan Thi Thuan has started weaving since she was six. 3 years ago, she brought silk waving to a next level by successfully researching and producing lotus silk, which from an often discarded part of the lotus plant – lotus stalk.

The below picture, featured on The Jakarta Post, is an image of artisan Phan Thi Thuan looking for discarded lotus stalks to create the most unique and expensive silk in the world.

Mrs. Thuan said that this predestined relationship to weaving fabrics from lotus silk was accidental. In 2017, when the National Assembly delegates together with My Duc district officials visited the production facility, a female delegate suggested Ms. Thuan try researching and creating silk products with lotus silk. “At first, I felt it was very strange because I had never heard of this product. But after searching on the internet, I found out weaving silk from lotus silk is common and quite popular in Myanmar ”, Ms. Thuan shared.

The process of making lotus silk always requires meticulousness and sophistication, Thuan elaborated. On average, a large silk scarf needs about 9,200 lotus stalks, which took a worker about 2 months to finally complete. And the results are quite worth it: A normal silk scarf costs about $20, meanwhile, for a silk lotus scarf this figure will be 10 times more.

In the past, people often had to work hard for hours to clear the rotting stalks on the lotus field to avoid damaging the soil and the emergence of harmful insects. But thanks to her foresight, she has brought Vietnam traditional silk weaving products to a new level. Currently, Mrs. Thuan has a workshop with about 20 workers, mostly women, to pick up stalks on lotus fields, before splitting and rolling it into yarn.

Although lotus silk has been produced in a few countries, including Myanmar and Cambodia, Ms. Thuan is still considered as a pioneer in this creative field in Vietnam.

At the same time, Ms. Thuan also organizes training sessions for students during their breaks, in the hope of creating a dynamic space for this traditional field.

Ms. Nguyen Thi Xoa, 40 years old, was guided by Ms. Thuan in 2017 and now she wants her children to follow her career. She shared: “Although this job was very difficult for me at first, now I love it. This is a stable job and I am proud of my work.”